Every bit of information that is entered into nodegoat can immediately be published through a public user interface. This allows the Encyclopedia of Romantic Nationalism in Europe to instantly publish articles and a wide range of research data. This data also includes a set of over 38.000 letters that can be queried through the public user interface. In this blogpost we discuss the steps we took to allow visitors to dynamically explore this dataset.

The Study Platform on Interlocking Nationalisms (SPIN) at the University of Amsterdam has created a dataset of metadata of over 38.000 letters of nineteenth century intellectuals. This data has been manually entered and imported semi-automatically (geo-referencing and disambiguating people was largely done by hand). Sources include a range of publications of letters, like Breve fra og til Carl Christian Rafn, med en biographi, plus two existing datasets: (1) the metadata of over 18.000 letters of Jacob and Wilhelm Grimm were provided by the Arbeitsstelle Grimm-Briefwechsel Berlin, and (2) the metadata of over 14.000 letters of Sir Walter Scott were provided by the Millgate Union Catalogue of W. Scott Correspondence; courtesy prof. Millgate & National Library of Scotland. The remaining 6.000 letters were entered by hand by SPIN, based on publications of letters of various other intellectuals throughout Europe. This means that the dataset is a combination of a number of personal networks and that we have an overrepresentation of letters sent by the people at the center of these personal networks.

This dataset is part of the Encyclopedia of Romantic Nationalism in Europe (ERNiE). ERNiE will include over 1.500 articles on topics and people associated with the era of romantic nationalism (e.g. Dress, design : Romanian, Karadžić, Vuk Stefanović, Felicia Hemans). ERNiE also includes other materials like monuments, architecture, art, and currency. ERNiE is coordinated by SPIN. The editor of ERNiE is Joep Leerssen.[....]

Next week there will be a nodegoat workshop at the 'DARIAH-EU Annual Meeting' in Gent. This event will take place on 10-13 October. The nodegoat workshop will be on Tuesday 11 October from 14:00 to 15:30. You can find the full program here.

We have proposed a session at the THATCamp Amsterdam on Linked Data challenges. Together with Ingeborg van Vugt we plan to discuss the benefits and difficulties of Linked Data in the humanities.

After a stimulating Virtual Heritage Network conference last year in Maynooth, we look forward to this year's conference in Cork. The conference will take place on 8-10 December.[....]

A Wikidata/DBpedia Geography of Violence

We have taken data available in Wikidata and DBpedia on 'Military Conflicts' to create this interactive visualisation in nodegoat: 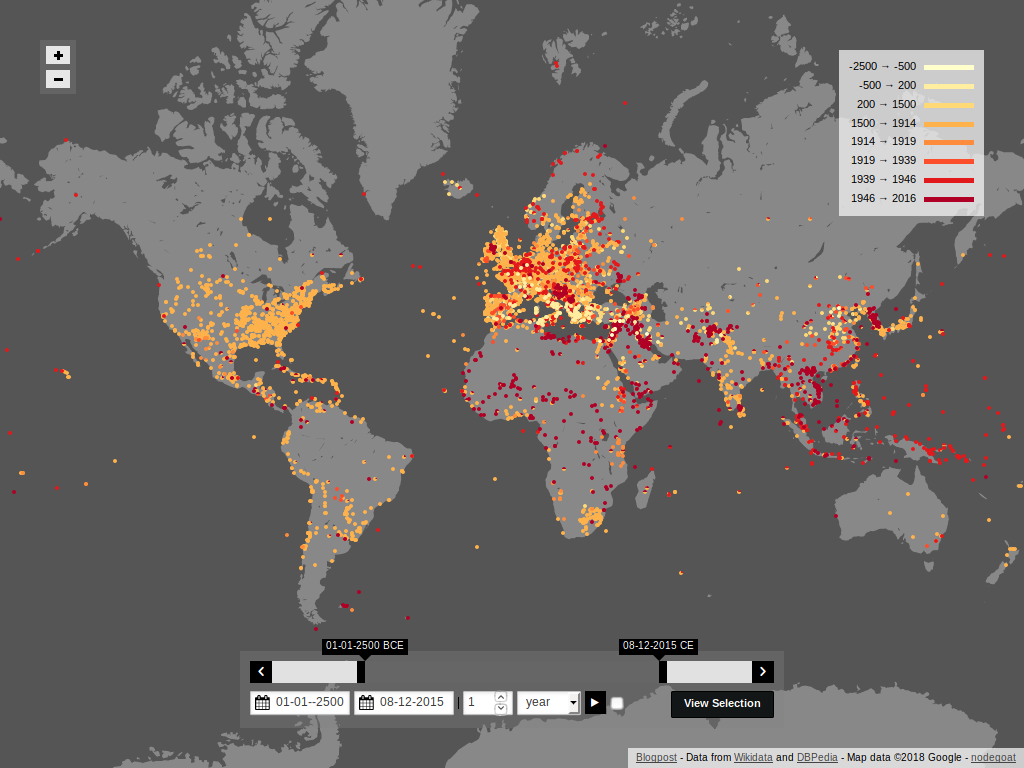 From the outside, it can be a challenge to keep up with all the developments within the ever expanding universe of wiki*/*pedia. So it's good to be reminded now and then of all the structured data that has become available thanks to their efforts:

This looks pretty neat, especially since Wikidata currently has over 947 million triples in their data store. Since battles usually have a place and a date, it would be nice to import this data into a data design in nodegoat and visualise these battles through time and space (diachronic geospatiality ftw).[....]